The Arizona debate was complete. There I was, checking some Tweets and taking a last look at Facebook before I went to bed. But before I closed my notebook, I noticed an oddly familiar face staring back at me from the right margin of my Facebook page, in the form of a Facebook-approved advertisement.
His eyes are deeply set; his black hair sits atop his squarish shaped head opposed by his well-defined square jaw. I knew his face, I’d seen him before, it had been a while, but where? It was Mohamed Atta, the ringleader of the 19 hijackers who killed 2,977 people on the morning of September 11th, 2001.

Side-by-Side image of Facebook advertisement and Mohamed Atta Wikipedia page
You are probably asking the same question I was, “why is he on my page and what could this advertisement be for?” Not online courses on terrorism, not for some security product, or not as an advertisement for employing a government job to help stop the next Mohamed Atta. Rather, it was apparently an advertisement for insurance-compare-save.com, an online insurance company that urges “drivers in Texas who drive less than 35 miles a day” to “read this.” Did I fail to mention it wasn’t just a picture of Mohamed Atta, but a picture of Mohamed Atta imposed upon a Texas Drivers License.
Yes, the face of the 9/11 hijackers, the unfriendly face that commandeered an aircraft with 87 souls on board (not including the other four hijackers), the man whose mouth uttered the words “we have some planes, just stay quiet and you will be okay,” the eyes that acquired the north World Trade Center tower, were being advertised for car insurance.
I began to doubt myself, no way would an insurance company use a common picture of an easily recognized terrorist who led the most horrific attacks in American history barely more than a decade ago in an advertisement, much the less copy and paste the picture onto a Texas drivers license. I used the wonders of the internet, searched for “Mohamed Atta,” clicked the Wikipedia Link, and confirmed my suspicion. Just to be sure, I searched for “Mohamed Atta pictures” and found the same dead eyes staring back at me in every picture I found – it was him. Though the image in the advertisement was a bit fuzzy, it is clear – the eyes, his hair, the shape of his head, his chin, the larynx and the shadows it cast on his neck, the black shirts collar, the shadow on the white back ground; no question about it – it is him.
Mohamed Atta is the face in the advertisement for InsuranceSavings, an insurance company found at the aforementioned website with a listed address at a P.O Box in Hollywood, Florida. I searched the website and could not find the same picture on their official website; fortunately I had used the “print screen” feature on my computer and saved the full screen and then zoomed in on the advertisement itself.
Was there some intent in choosing the image they used? If so, why? What ulterior motive could an insurance company have for using Mohamed Atta? It doesn’t make sense; it is not like Mohamed Atta photos in advertising are a common occurrence, a standard clip art photo, or a default image programmed into Photoshop or any other software that I know of. It is obvious this photo was sought out and intentionally pasted onto an image of a driver license. At least they blurred out the name on the drivers license.
This morning I heard from an attorney representing the company, who informed me that the company is “conducting a full investigation.” He asked for more information, which I willingly divulged, and I told him the same story I just presented to you. After sharing the images with him, he said “the company has pulled all advertisements and other than that I can’t make any comment.”
I recalled the month I spent as a member of the Army Old Guard at the Pentagon following 9/11 doing rescue and recovery operations, separating pieces of building, plane and personal effects into separate piles, and organizing the mass amounts of funerals to be conducted in Arlington National Cemetery. Granted, private companies are free to do as they like, but what advertising genius would choose Mohamed Atta to place on a drivers license? What is next, Osama bin Laden for Mitchum Mens Smart Solid? Maybe Anwar al-Awlaki for Mr. Pib?
Kenneth Depew :: University of St. Thomas :: Houston, Texas :: @DepewK

If you're like us, you realize that most internet ads are worthless. The more intrusive and repetitive the ad, the more certain it is that it's a scam — some work-from-home fraud or bogus insurance deal, or some ripoff operation that wants to charge you money to get you FREE MONEY FROM OBAMA!!!.. So we miss whatever it is you see when you look at these stupid ads.

Ken DePew looked at one of the ads and really, really was disturbed by what he saw. What he was was in the screenshot he captured here.

You are probably asking the same question I was, “why is he on my page and what could this advertisement be for?” Not online courses on terrorism, not for some security product, or not as an advertisement for employing a government job to help stop the next Mohamed Atta. Rather, it was apparently an advertisement for insurance-compare-save.com, an online insurance company that urges “drivers in Texas who drive less than 35 miles a day” to “read this.” Did I fail to mention it wasn’t just a picture of Mohamed Atta, but a picture of Mohamed Atta imposed upon a Texas Drivers License.

DePew has been contacted by an attorney for the insurance site… the lawyer wouldn't say what was up, but did say that the company had pulled its ads to try to figure out how this particular familiar denizen of the ninth circle of Hell wound up in their advertising.

The outfit's probably still not selling anything worthwhile, but at least they did the right thing by zeroing out the Atta ad. Now, they might be able to sell insurance in Egypt or Pakistan with that picture, but they probably wouldn't want to — even the part of those nations' populations that aren't suicide bombers drive as if they were.

And then again: if John Giduck can be a terrorism expert, why can't Mohammed Atta be an insurance spokesman? Seriously, though, we think the great actor Dennis Haysbert is better qualified. For both jobs. 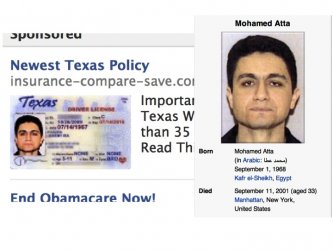